Rao’s Bakery was founded in 1941 by Johnny Rao. Johnny Rao and family opened the bakery at its present location, the corner of 10th and Calder in Beaumont, Texas. The bakery was known for its Italian cream cakes, cookies, and cream puffs. Through the years Rao’s had several different owners, but its doors never closed. Not much changed at Rao’s over 58 years and in 1998 Jake Tortorice bought the bakery. Jake’s vision was to restore the bakery to the reputable place he enjoyed as a child. 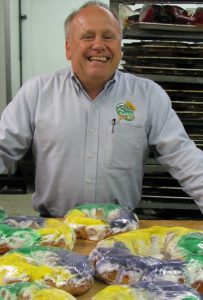 On a trip to Italy, Jake realized what “his” Rao’s Bakery would become. His vision was of a European style café’ that emphasized specialty coffee, desserts and service. Jake’s first priority was to remodel the original location on Calder Avenue in Beaumont. With the renovation it brought a renewal of the neighborhood bakery. It is today a morning meeting place for many before the daily grind begins. Jake then focused on building a second bakery located at Dowlen road in Beaumont. The Dowlen road location was his first opportunity to put most of what he learned in Italy to use. He enlarged the seating area, built a nice covered patio and enhanced the overall ambiance. Jake then received an opportunity to open a kiosk at the new Memorial Baptist Hospital in Beaumont. The hospital kiosk would be the first and only location where there wasn’t any production on site. In 2006, Rao’s opened it’s third bakery in the Champions area of Houston. In 2007, Rao’s opened it’s fourth bakery in Nederland.

Rao’s offers such unique experiences to it’s clientele throughout the years. For over 30 years Rao’s has offered summer bakery camps for children to come into the kitchen, and learn the basics of baking and decorating. During Mardi Gras you will always find a King Cake available for purchase in all of the locations. King Cakes have been a Mardi Gras tradition for centuries and Rao’s ships them to people all over the United States. Rao’s was one of the first bakeries in Texas to produce and sell Gelato. Gelato is Italian ice cream that is made a little differently than American ice cream. Gelato tastes creamier, it’s texture is softer and the fat content is substantially less than American ice cream.

Rao’s Bakery has been delivering smiles to SouthEast Texas for over 70 years. With a re-commitment to superior product, service and ambiance Rao’s is making many new customers smile. Jake Tortorice’s vision doesn’t stop with the current locations he has plans for more. Jake’s sons plan on carrying his vision long after he retires so that the Rao’s tradition lives on.

Select locations can make arrangements for catering orders. Contact us for more information.